The official public enquiry set up by the British Insurance Association to examine the causes of the multiple pile up on the A414 between St Albans and Hemel Hempstead on the 1st April 2018, was in response a request from the publishers of the Guinness Book Of Records. What follows is a precis of the relevant issues uncovered by twenty-six lawyers whose efforts were rewarded with fees totalling £25 million over a two week period. 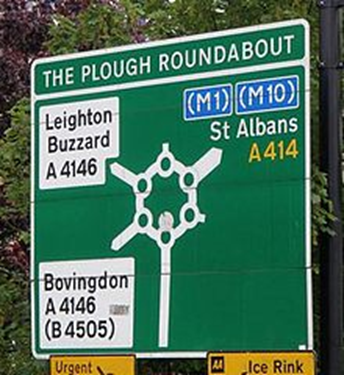 Kevin Marshall had been taught to drive by an ex-policeman so was used to approaching a roundabout with caution but safe in the knowledge that, being a roundabout, there was no automatic right of way; you entered without stopping if there was no other vehicle already in the roundabout and it was safe to do so. The other key element in the manoeuvre, as with all other motoring moves, was anticipation. As one approached a roundabout, an experienced driver always glanced to his right to assess the speed required of his vehicle, then slowed down or gently accelerated depending on what he judged to be appropriate to the circumstances. But, built in to the training, was the inalienable principle that it was not obligatory to stop.

Jason Bracken, a timid civil servant schooled in the practice of following standing orders, had not been taught to drive by an ex-policeman so was convinced that he should stop at each roundabout – look left then right – and only proceed if no other vehicle was in sight. To be absolutely safe, one applied the handbrake and disengaged the clutch on stopping. The problem arises when a Jason Bracken is followed by a Kevin Marshall with both intending to enter the roundabout according to their own conflicting versions of the Highway Code.

Ms Janet Brownly was a nervous thirties something who was under instruction by a trainee member of the British School of Motoring (BSM) whose vehicle benefited from dual controls. He had impressed upon Ms Brownly before starting out on her very first lesson, that she should take care to listen to all instructions; to put her faith in the instructor who had her health and welfare at heart and who was, by definition, the more experienced driver.

On approaching the roundabout, her inexperienced instructor had said “when you get to the roundabout, go straight over” a phrase which he came to regret as it could be construed as ‘unhelpful’ in the context of Ms Brownly’ s 10-minute experience of driving in Hemel Hempstead. Anxious to faithfully follow his instructions to the letter, she mounted the kerb in front of her and the car came to a halt on the central reservation.

A Prime Minister approaching a roundabout in an official car will have a chauffeur who may or may not have had the benefit of police training, but who was often accompanied by motorcyclist outriders who should be trained to cope with all eventualities. Whether all or any of these government personnel can be counted as ‘reliable witnesses’ is another matter; especially if the Prime Minister is preoccupied in the back seat with a pile of official red boxes and a demanding private secretary.

Other junior government ministers approaching a roundabout in a private capacity might need to decide who was driving the car as point swapping with spouses was a popular way of protecting a clean driving license despite the experience of Chris Huhne the ex-MP who, together with his then wife Vicky Pryce, were both jailed for perverting the course of justice ten years earlier.

Thus it was, that Adam and Evelyn Whyte of 23 Orchestra Vale, Stowmarket, a rare example of a husband and wife team who were both members of parliament, Adam for Bury St Edmunds, Evelyn for Luton South, couldn’t decide who had been driving but did not deny that they were both present in the their Land Rover Discovery on the day in question.

Jonathan Bramley, an architect from St Albans, drove a 1954 left-hand drive Citroën 2CV which he had lovingly restored and could bore for Britain on the history of this unique vehicle. Jonathan’s main preoccupation when entering a roundabout was to test the car’s novel, extremely long-travel suspension. Designed for French farmers to carry eggs over bumpy ground without breaking them, Jonathan had devised many experiments to test this 1948 manufacturer’s claim; which is why on the day in question his passenger was a dozen freshly laid ducks eggs mounted on a small four-legged silver gilt side table he had picked up an auction in the medieval town of Lacoste in Provence.

Maria Theresa Da Vinci was driving her ‘baby boy’ to Heathrow for the return journey home to Italy following an eventful week in East Anglia. She had insisted on driving the hire car herself, but they had been diverted off the M25 and were circumnavigating St Albans when they took a wrong turn and were now approaching The Plough Roundabout with the 25-year-old Leonardo as navigator.

Mamma: Which way at the roundabout Leo?

Leo: Which roundabout – there are six of them?

Mamma: Now is not the time to play games with your Mamma, Leo, we have a flight to catch!

Leo: Ok, then do what you normally do at the Piazza Venezia in Rome

Mamma: And what is that?

Leo: Close your eyes and pray for deliverance!

Mamma: What did you say?

Mrs Gertrude Abrahams was on her way to deliver a talk to DELTA, a group of specialist civil servants studying traffic management for the Department of Transport. This was only the group’s second meeting and she was determined to make an impression being the oldest member by some considerable margin. The whole of their first meeting had been taken up with procedural issues including a suitable acronym to describe their work. As their shop steward argued successfully, for a think tank to have credibility it needed a simple acronym which would help with continuous funding from the public purse.

The group had come up with DELTA to mean Devising Excellent Long-Term Answers. Having acquired her driving license in 1939, Mrs Abrahams approach to roundabouts was self-taught so it would always be difficult for a defending lawyer to ascribe a portion of the blame to a third party, Mrs Abrahams having never been required to take a test.

Half a dozen sixth formers from a local college were on a mission to raise money for the local Rotary Club, whose very name had been the inspiration for a spectacular prank – code name Operation Windmill - devised by one of their more anarchic members. The basic proposition was to test roundabout etiquette to destruction by occupying a roundabout by driving round and round at a sufficient speed to prevent another vehicle entering. The whole enterprise was filmed by a camera mounted on drone sixty feet above The Plough Roundabout, the intention being to create a You Tube phenomenon. Tom Watson, one of the more entrepreneurial members of the conspiracy, planned to capture still photos from the drone and turn them into postcards for sale at his mother’s tea shop in Hemel Hempstead High Street. He thought this might make up for his rather indifferent A level results.

William Peters had been operating out of Carnaby Street since taking over his father’s shoe shop in the mid-eighties. Sandwiched between Cheap Monday and Pretty Green, he was feeling the effects of continuing austerity. His daily commute from Leighton Buzzard in his aging Jaguar was getting to be something of a chore but he really didn’t know what else he was qualified to do. The suitcase in the boot contained his latest company accounts plus an overnight change of clothes as he intended staying over after attending an industry dinner.

Now single following a messy divorce, William was at a crossroads in his life. The roundabout approaching was known locally as the Magic Roundabout with six possible exits. If only he had six options to choose from, but his accountant had reduced them to two. Sell up or purchase a box of matches and set fire to the premises. The latter could be more attractive as a 60p investment in Swan Vestas might yield an insurance wind fall. As footage on You Tube showed, once the six minis driven by the six sixth formers at the six subsidiary roundabouts of The Plough Roundabout successfully held sway at a speed of 30 mph each, chaos ensued and a total of 25 vehicles collided causing a minimum of £1 million pounds worth of damage but, miraculously, no one suffered serious injury.

Sales of Citroën 2CVs soared on the news that none of the ducks’ eggs were broken, Jonathan Bramley having been represented at the enquiry by RSPCTUC, The Royal Society for the Prevention of Cruelty to Unborn Canards.

Lawyers for the students successfully argued that they had not committed any offences as they had kept within the national speed limit for subsidiary roundabouts.

Maria Theresa Da Vinci and her son Leonardo did not miss their flight. They had set out a day early by mistake, much to Leo’s delight and his mothers irritation.

As it was impossible to say who or what was the actual cause of the chaos, the twelve insurance companies involved declared all their policies null and void on the grounds of force majeure.

The Guinness Book Of Records is still trying to work out which world record has been created.